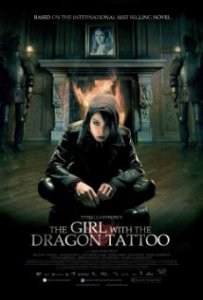 In 2008 Stieg Larsson’s The Girl with the Dragon Tattoo was published in English and Larsson posthumously became the second best-selling author in the world; a year later the Swedish film version of this first book in his Millenium trilogy was released. The subject of these thrillers about “the girl” named Lisbeth Salander is finally, as journalist Mikael Blomkvist says in the third book, “not primarily about spies and secret government agencies; it’s about violence against women, and the men who enable it.” To emphasize his point Larsson added statistics on male violence against women to his first book.*

The Millenium trilogy “phenomenon” has been discussed at length, in print and online, since the books first appeared. While David Walsh (at the World Socialist Web Site) saw the trilogy’s popularity as a sign of the degraded state of the left-wing point of view, with its simplified world of black and white, villains (who are always men) and heroes, and no shades of gray, fans of the trilogy claimed that the vivid, anarchic, and complex character of Lisbeth Salander was more the point. Sarah Seltzer (at the Christian Science Monitor) pointed to Salander’s uniqueness as a female protagonist who is “a genuine anti-hero”, adding that Salander is in no way male-defined, being neither “girlfriend, sidekick, or prey”.

Lisbeth is a Goth-punk computer nerd, a brilliant hacker with few social skills. She cares deeply for her few friends and seems to care very little for anyone else, but she fights against the abuse of women whenever she comes across it, in whatever ways she can. In book 2 she saves the life of a stranger whose husband is trying to kill her by killing him instead under cover of a hurricane; and in book 3 she helps catch Erika Berger’s stalker, even though Berger is something of a romantic rival, and Lisbeth herself is basically imprisoned in a hospital, with a cop outside the door. Throughout the trilogy Lisbeth takes personal responsibility for stopping the perpetrators of violence against women — she is furious at Harriet Vanger for simply escaping, and then allowing her brother to continue to abduct and kill women — and near the end of book 3, finding the dead women in the factory where her half-brother is hiding, Lisbeth thinks that she should have dealt with “this” (her male relatives’ trafficking business) sooner. She is a self-appointed justice system of one.

As an avenger Lisbeth is bloodthirsty without being particularly sadistic, confining her torture of the guardian who raped her to the eye for an eye variety, and tattooing a warning to other women on his torso. She is a vigilante who will use any means at her disposal to destroy those she has decided deserve it, hacking into their computers to ruin their reputation (as happens with the pedophile psychiatrist) or taking an ax to them (as she does to her gangster father). But filmgoers and readers tend to agree with Salander’s champions in the trilogy that her actions are just, even though they are outside the law; and that these men get what they deserve, even when that is death at Lisbeth’s hands. Judith Lorber (at Dissent) called Salander’s physical violence “the guilty secret of Larsson’s phenomenal success. We know it is fiction, so even if it isn’t properly feminist, we exult over Salander’s successful physical battles with men twice her size. It may be a vicarious purging of the constant threat of violence that women experience from men.”

Larsson himself was thinking in terms of misogyny: in Swedish, the first book was baldly called Man som hatar kvinnor or Men Who Hate Women. According to his longtime partner Eva Gabrielsson, Larsson had a personal stake in his story in the form of a guilty conscience for not trying to stop a gang rape at a party when he was 15. Although another friend of Larsson’s said the story was apocryphal, it has served as a media backstory to the trilogy, in which Larsson made sure that Lisbeth Salander, a small, fragile-looking woman, who had been subjected to violence and sexual abuse from childhood on, got to fight back and win without anyone’s help.

*Thanks to Kelli Corrado for this observation.

One thought on “Women fight back: Lisbeth Salander, part I”