Starhawk’s *The Fifth Sacred Thing is about a not-so-far-in the future California where water is scarce and the earth, air, and ocean are poisoned. San Francisco is a Pagan utopia where everyone works together and no one starves; a place of Witches and magic, run by consensus, and defended by nine old women who dream strong (you got to love it). And people still don’t always get along. Meanwhile “Angel City” (LA), is run by the Stewards and Millenialists, who rant about ‘purity’, are racist, sexist, and homophobic, and own all the water, which is how they control the populace. The story opens when Bird, a musician who went South to shut down a nuclear power plant, ‘wakes up’ in prison with ten years of his life gone; and Madrone, a healer, chases the virus that is causing an epidemic to the spirit world, to fight it there, out of sheer desperation. The story follows these two characters, the parts they play in events leading up to LA’s attack on SF,  and their struggle to embody the fifth sacred thing. (Click on author’s name for info about the movie and Starhawk’s other books.) 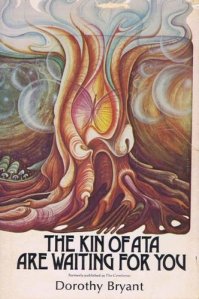 Dorothy Bryant‘s, *The Kin of Ata are Waiting for You, is a self-published science fiction classic about a utopian community somewhere in this world. The story is told from the point of view of a dissipated, famous thriller writer who finds himself miraculously transported to the island of Ata after a car accident and a murder. (Click on her name for bio and Bryant’s other books.)