This is the main genre not to fear – fantasy, with the et al. including science fiction (s.f.), speculative and fabulist fiction, magical realism, fairytales, and young adult (YA) and children’s fantasy-type fiction. There are a lot of names because there are so many ‘unrealistic’ stories told. For commentary on how the literary establishment, and many readers, regards these kinds of stories, and alternate ways to look at them ‘critically’ (as in, ‘thoughtfully’), try Ursula Le Guin’s essays in The Language of the Night, especially the chapter called “Why Are Americans Afraid of Dragons?” (This essay is from 1979, so it’s the state of the art pre-Harry Potter; things have changed somewhat since then, at least insofar as money-making, but fantasy and its et al. is still looked down on as frivolous escapism. For Le Guin’s other literary criticism, see Dancing on the Edge of the World, and The Wave in the Mind.)

This list was compiled over the years for friends who had not tried fantasy or science fiction and were curious. I’ve marked my own favorites with an *. All books with an * have been read so often they are held together with tape and rubber bands.

*The Lord of the Rings by J.R.R. Tolkien is so obvious it needs no explanation, but it was the first adult fantasy I read, and, like the Beatles’ song “I Wanna Hold Your Hand”, it changed my life. In this case it opened up my reading universe.

*The Master and Margarita, by Mikhail Bulgakov. Banned in the Soviet Union for decades, the story of what happens when the devil comes to Moscow in the 1930s – and the only people who know who he is are a man who has written a novel about Pontius Pilate (and been reviled by the literary establishment, and driven crazy, because of it), and his mistress Margarita.

*Ursula Le Guin wrote a book about a young wizard named Ged and his schooling called *A Wizard of Earthsea, the first fantasy I was able to go into completely post-Tolkien. It was followed by *The Tombs of Atuan, which brought Tenar into the story, a young woman who had been taken as a child to be priestess of the tombs that Ged has come to rob. The last book is called The Farthest Shore, about death and what happens to those who try to avoid it. 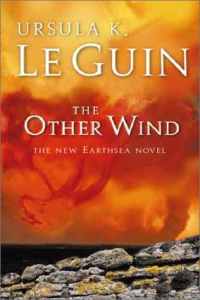 A decade or so later, Le Guin went back to Earthsea and wrote three more books about it, following up on the story of Tenar and Ged in Tehanu. Le Guin  re-tells Earthsea’s history (and develops it) in The Other Wind and Tales from Earthsea, taking the point of view of the conquered and the hidden, to give a different version of what began as a boys-only club.

Some of her science fiction:

*The Lathe of Heaven, about a man in an overcrowded ‘future’ whose dreams come true and change reality, and the unscrupulous shrink who is trying to ‘cure’ him. A good intro to science fiction and Le Guin.

*The Dispossessed is about a temporal physicist named Shevek (who comes up with the theory behind the ‘ansible’, a future artifact that many other s.f. writers simply adopted once Le Guin’s character figured out instantaneous transmission between two spots vastly distant in space). Shevek lives on a planet where there is no money, and everyone is taken care of, and there are still power plays (!); to share his theory he has to travel to the corrupt and iniquitous planet that is more like ours (except in better shape).

The Left Hand of Darkness, about a world in an ice age, where everyone is neuter except for a week each ‘month’, when they become either male or female, so everyone can be either sex (the father of one child can be the mother of another). A planetary ambassador who is a man from a sort of interstellar UN, is at risk (his mission and his life) when political factions use him for their own ends, but the story is really about his friendship with a native wo/man, the difficulties they have in communicating across different cultures, what it means to trust and befriend ‘the other’.

Always Coming Home, an anthropological look at northern California in the far future.

And more…these are just a quick sample.