(continuation of my hopeful imagining for Tim Devin’s zine, The History of Somerville, 2010-2100) 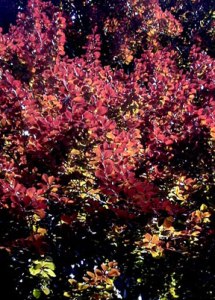 from A Tree Grower’s Diary, see link below

In the middle of Davis square is a giant European purple beech, about fifteen feet around. It’s a wishing tree, and it’s hung with offerings – bells and folded colored paper, tiny bottles, birdseed on sticks. Underneath the tree there is always a storyteller, and there is always a dreamspeaker. Other parts of the square are devoted to music and dancing, and moving or not meditation, and outdoor schools. Apparently all the squares in Somerville – and what used to be Boston – are like this now.

The Davis Square T station is still here, only it’s running green on a combo of wind and solar energy. There’s a monorail system overhead, zipping around as silent as a dragonfly, and following ley lines. I see horses and donkeys – Tufts field has become pastureland – and even more bicycles and bicycle-carts – the bike path that used to end at Cedar Street now runs all the way to ocean in the east, and to New-York-state-that-was in the west.

Meanwhile the parking lots in Davis Square have become live-in parks, dotted at random with small to medium-sized cottages – each one different, but most have grass or flowers on the roof – that turn out to be no-income housing, for those people who used to be called homeless. Now they live among communally owned and tended orchards and gardens, in their own homes, each stamped with the personality of its owner – one is nearly invisible in the bamboo grove around it, another is painted in blue, pink, and green stripes, another seems made entirely of windows in different shapes and sizes, each one curtained in so many colors the house looks like a patchwork quilt.

There are a LOT more birds – even big ones like eagles and cranes, and is that a flock of passenger pigeons?* – and fewer people overall, but way more children out and about, playing in the grassy spaces where the traffic used to be. There isn’t anything resembling a skyscraper around here, not even downtown; my bird-guide tells me they went the way of the woolly mammoth and the meter maids. And the big nursing home on College Avenue is part-school, part elder home. Apprenticeship is once again the mode, so there’s less ‘retirement’, and then there’s always those elders who are good with kids, and kids who need them.

Across the street and up a block, the West branch library is now open 24/7, with plenty of librarians for each shift, and no shift lasting longer than 4 hours. It seems like a joke in poor taste that the library was once closed most evenings, every night, and all weekend, and understaffed besides. In this day and age it has been completely restored inside (with an elevator!), and has trees out front and flowers on the roof, like a crown.

On a sadder note, here’s the story of a European purple beech.