Been telling friends about this writing exercise from Tristine Rainer’s book, Your Life as Story: Writing the New Autobiography, but the exercise was actually put together by another author and memoir-writing teacher, Deena Metzger, along with a student in one of her classes. In 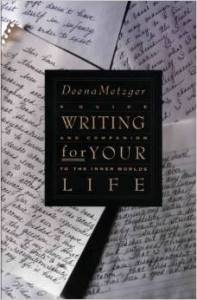 Writing for Your Life, Metzger recounts how this student had had such a barren upbringing (father dead, mother an alcoholic), that she felt she had no history, nothing to write about. Metzger suggested she write about an aunt of hers, an artist who lived in Manhattan, imagining whatever she didn’t know (which was nearly everything). Instead of simply making a portrait of her aunt, the student ended up writing an entire imaginary history, in which the aunt became her friend and mentor, and took her to live with her in NYC. According to Metzger, the student writer was transformed; she had changed how she felt in the present by creating a new past for herself.