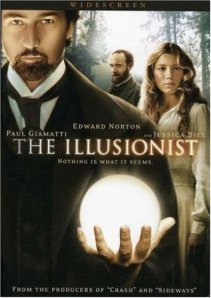 Since the last category seemed toughest, I decided to start with it, and chose The Illusionist with Ed Norton. The movie isn’t based on a book, though, but a short story called “Eisenheim the Illusionist” by Steven Millhauser. The short story has some great lines, like this: “It was the age of levitations and decapitations, of ghostly apparitions and sudden vanishings, as if the tottering Empire were revealing through the medium of its magicians its secret desire for annihilation.” And this: “Stories, like conjuring tricks, are invented because history is inadequate to our dreams.” These lines make a subtext to (and were probably the inspiration for) Neil Burger’s screenplay, but Millhauser’s story focuses on “the troubled heart of magic, which yearned . . . toward the dark realm of transgression”. With his eye on “dark transgressions”, Millhauser spends more time on the relationships between the ghosts Eisenheim raises onstage than on the magician’s connection to any other person. The main characters in the film – Sophie, the Crown Prince Leopold, Inspector Uhl – barely appear in Millhauser’s short story.

In Burger’s film the main “transgression” is that Eisenheim, son of a Jewish cabinetmaker, has the gall to love a Hungarian duchess (Sophie) who is betrothed to the Crown Prince. Sophie and Eisenheim had a childhood love that neither outgrew, even though they haven’t seen each other in over a decade. The Crown Prince is abusive, power-hungry, an alcoholic, and a believer in scientific rationalism. Inspector Uhl is in the prince’s pocket, but as an amateur conjurer Uhl is in awe of Eisenheim’s skill as a magician, and this gives a special charge to Uhl’s role as the point-of-view character or storyteller in the film. In this sense Uhl is the audience for both men, and that makes him the pivot-point.

In The Illusionist Burger took the bones of the short story, fleshed it out, and turned a sort of fabulist existential anecdote into another kind of fairy tale. His (and Norton’s) Eisenheim is not a man compelled and possibly ensnared by dark mysteries, but a heroic trickster who must defeat the Crown Prince to free his true love. And the only weapons he has to fight with are his wits, and his ability to make people believe in his view of the world instead of the Crown Prince’s. When the prince says that all Eisenheim has done is trick people, “It’s all an illusion,” Uhl replies: “There’s truth in this illusion.”

Well, give me this anytime. The triumph of the imagination over a fascistic regime, plus: true love, intrigue, and magic; Ed Norton, Jessica Biel, Paul Giamatti, and Rufus Sewell as an appalling but plausible and sometimes even sympathetic villain. The production values are through the roof – filmed in Prague (as late 19th century Vienna), with music composed by Phillip Glass, and costumes by the amazing Ngila Dickson, who can make a plain overcoat move like a cape (she designed the clothes for the Lord of the Rings movies). As a bonus, the magic is performed as it was at the end of the 19th century and for the most part filmed without special effects, through help from contemporary stage magicians Ricky Jay, Michael Weber, and James Freedman.